The post What went right this week: a round-up of the latest good news stories appeared first on Positive News.

An oil spill in Russia caused 21,000 tons of oil to leak into the Ambarnava River on May 29, 2020. It also spilled over into nearby Daldykan River, turning both of them crimson. Local officials and environmentalists have said it could take over a decade to clean up. The spill occurred when a diesel fuel reservoir collapsed at a power plant.  Metal and mining giant Norilsk Nickel, located outside the city of Norilsk, owned the plant.

So far, the oil has spread out twelve miles from the original spill site, contaminating waterways and ecological systems.

“The fuel has got into Pyasino as well. This is a beautiful lake about 70 kilometers (45 miles) long. Naturally, it has both fish, and a good biosphere,” Krasnoyarsk region governor Alexander Uss told Interfax news agency Tuesday.

The geography of the impacted area 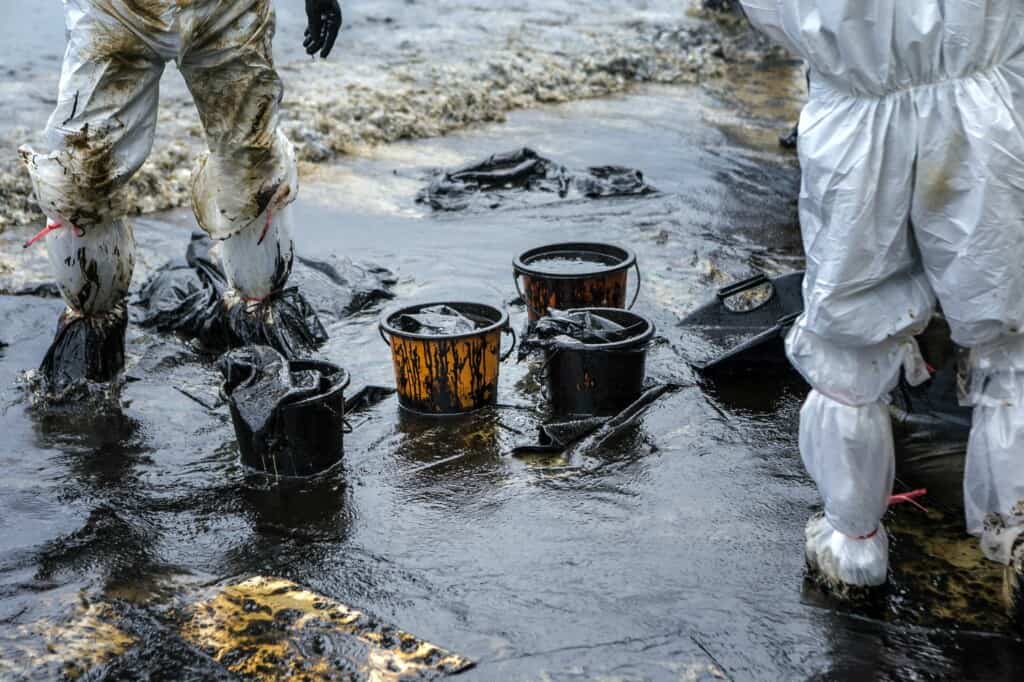 Lake Pyasino flows into the Pyasina River. Then, it flows into the Kara Sea in the Arctic Ocean. Director of Greenpeace Russia Vladimir Chuprov told AFP it would be disastrous if 10,000 tons of fuel or more went into the lake. He said if it reached the Kara Sea, it would have even worse consequences. The news about the oil spill reaching the lake came a week after a spokeswoman from the cleanup team said to AFP that the discharge had been stabilized.

However, regional officials said that they saw a large concentration of diluted oil products past the booms, according to Yulia Gumenyuk, a deputy environment minister. Norilsk Nickel said that no oil had reached the lake.

“Our samples at the Pyasino Lake show 0.0 percent contamination results,” Sergei Dyachenko, the company’s first vice-president, and COO said in a video conference Tuesday. He said it was highly unlikely the fuel would reach the ocean.

“The distance from Pyasino Lake to the Kara Sea is more than 5,000 kilometers (approximately 3,107 miles),” he said. Even if it doesn’t reach the ocean, the oil spill has already contaminated the rivers, lakes, and soil in the area. So far, cleanup operations have removed 812,000 cubic feet of contaminated dirt, according to BBC News.

“[The spill] will have a negative effect on the water resources, on the animals that drink that water, on the plants growing on the banks,” Vasily Yablokov of Greenpeace Russia said, according to BBC News.

Greenpeace compares this disaster to the 1989 Exxon Valdez disaster in Prince William Sound, Alaska. Exxon Valdez, an oil tanker owned and operated by Exxon Shipping Company, hit Bligh Reef on the way to Long Beach, California, and spilled 10.8 million gallons of oil over the next several days. It is considered the worst oil spill to date as far as damage to the environment.

Prince William Sound is very remote. The area is only accessible by helicopter, plane, or boat, straining response efforts by the government and industry officials. The oil spill eventually affected around 1,300 miles of coastline. Additionally, it disrupted the habitats of salmon, sea otters, seabirds, and seals native to the area.

As far as the Russian oil spill goes, prosecutors in the case have ordered checks at “particularly dangerous installations” built on the ice shelf. The Russian Investigative Committee also launched a criminal claim against the company involved over pollution and purported negligence.

How global warming contributed to the oil spill

A 2017 report to the Arctic Council, an international forum which includes Russia, warned that due to global warming and a melting ice shelf, oil tanks in permafrost could no longer support the loads they did in the 1980s. Many of the oil tanks and other equipment were built during this time, but many companies have not adapted to the changing climate.

However, a recent report by Bloomberg news agency says that Russia’s new oil infrastructure takes the changing climate into consideration. For example, storage tanks on the Yamal Peninsula get built on piles, so the melting permafrost doesn’t cause them to sink.

Norilsk is committed to cleaning up the affected areas. However, it’s already well-known for causing pollution. The oil industry creates a lot of income in this area of Russia.

In 2016, Norilsk Nickel admitted that an accident at one of its plants caused nearby Daldykan River to turn crimson. Heavy rains at one of the plants caused a filtration dam to overflow, leading to spillage into the river.

Consequences of the oil spill on the environment

The latest oil spill is the worst of its kind in the Russian Arctic. This event caused president Vladimir Putin to declare a state of emergency. On Wednesday, investigators detained three employees, two engineers and the director of the power station, on suspicion of breaching environmental protection rules. If convicted, they would serve up to 5 years in prison.

However, the company said in a statement they consider this measure unreasonable. Indeed, they stated that the detainees are cooperating with law enforcement. They added that the employees could serve a better purpose, actually helping with cleanup operations. Russia’s richest man, Vladimir Potanin, head of Norilsk Nickel, had a conversation with Putin about the fuel spill. He said the company would pay for clean up operations, estimated to cost around $146 million.

Viktor Bronnikov, general director of Transneft Siberia – an oil and gas transportation company helping out with the cleanup – said that progress was being made. However, he and the team had witnessed birds and marine life getting killed from the spill. He said if a bird lands on the fuel or another animal swims through it, they will surely die from the pollution. Workers have been using booms to contain the diesel on the surface of the river so they can pump it into tanks on the shore.

He went on to say that cleaning the fuel from the Ambarnaya River will take at least eight to 10 days. However, Russia’s Federal Fisheries Service announced that restoring ecological balance in the water where the oil spilled may take decades. Also, Greenpeace Russia noted that the booms would only catch some of the oil. So most of it will stay in the environment, causing a threat to the ecological systems.

President Putin has made his frustrations known to the individuals involved, asking a manager of the company during a teleconference, “Why did government agencies find out about this only after two days? Are we going to find out about emergencies from social media now?”

However, the company said it informed authorities promptly. They then blamed thawing permafrost along the ice shelf for the collapse of the fuel tank.

The company’s First Vice President Sergey Dyachenko said, “By the nature of the cracks in the concrete and the collapse of the supporting columns, we believe something happened in the ground — possibly the thawing of the soil.”

In another press release, the company said that “a sudden sinking of supports of the storage tank which served accident-free for more than 30 years” may have caused the accident.

Investigators said the power plant’s fuel tanks had required major repairs back in 2018. However, the company made no changes and continued to operate unsafely.

“If you had changed them on time, there would have been no environmental damage and no need to foot such costs,” Putin told Potanin in a televised video call.

Greenpeace Russia and other environmental groups claim the company “sought to avoid responsibility for the accident” by blaming it on climate change.

The environmental organization warned oil and gas companies of the dangers of a thawing ice shelf in 2009. So, environmental groups believe the company had plenty of time to repair their processing facilities to mitigate the effects of climate change.

The oil spill happened when a fuel tank began to sink due to permafrost melting along the ice shelf in Norilsk. At least, that’s what the company believed happened.

BBC Weather reported temperatures within the Arctic Circle at around 30C last week. Those temperatures caused the solid ground typically at 0C, or 32F, to begin melting. A lot of industrial equipment used for oil and energy companies sits on the permafrost terrain in Russia.

This event was another tragic accident that will cause a significant amount of damage to surrounding wildlife and the environment. Unfortunately, the world runs on oil. Many plants in the Arctic have not kept up safety standards with the rapidly warming climate. The investigation is ongoing into the Norilsk Nickel company responsible for the oil spill. However, arrests will not take away the damage to animals and land.

We must all act together responsibly. Only then will we create a cleaner, happier Mother Earth for all creatures. Oil companies should have stricter standards in place and have regular checks of equipment to ensure no leaks will occur. Accidents do happen, but companies should do as much as they can to avoid such tragedies. Hopefully, this oil spill will encourage all oil companies to create more rigid standards for their equipment.

Events that began in Minneapolis have reverberated around the globe in widespread outrage. Pastor Lance Hahn, who is white, called his longtime friend Bishop Parnell Lovelace who is black. “What can we do?” he asked the reverend. “Help me understand.”

Beyond fame and fortune, certain traits and behaviors may have pervasive influence in climbing the social ladder, according to a study by evolutionary psychologists.

A Religious Perspective on Relationships

Get the show notes for todays episode: www.relationshipboosters.com

Relationships#Advice#ZimWomen Watch as she gives some piece of advice to all women out there .Comment,Like and thanks for Subcribing.